Paul and Steve are starting to record a few tunes from the past (Steve's days with the Boss Men and Freedom) and a few new ones, more detail to follow soon. Freedom was a psychedelic rock band active in the late 1960s and early 1970s, formed initially by members of Procol Harum. Ray Royer and Bobby Harrison, who had performed on the hit Procol Harum single "A Whiter Shade of Pale", were kicked out of the Harum by vocalist Gary Brooker, and replaced by Robin Trower and Barry Wilson. Royer and Harrison then formed Freedom with Steve Shirley and Tony Marsh, who was immediately replaced by pianist / organist Mike Lease, releasing two German singles and the soundtrack for the Tinto Brass/Dino de Laurentiis film Attraction (original title Nerosubianco, also known as Black on White). In 1968, Harrison entirely overhauled the group's membership, and the new line-up began recording with more of a hard rock sound, scoring tour dates with Black Sabbath, Jethro Tull, and The James Gang. They achieved great renown for their excellent version of the Beatles song "Cry Baby Cry" on their second album Freedom at Last. Further lineup changes occurred before the band finally splintered in 1972, with Harrison going on to Snafu. Bobby Harrison - vocals and drums Ray Royer - guitar Steve Shirley - bass Tony Marsh - keyboards Mike Lease - keyboards Robin Lumsden - keyboards Roger Saunders - guitar Walt Monaghan - bass Peter Dennis - bass Steve Jolly - guitar Freedom was formed in the late summer of 1967 by two ex-Procol Harum members, Ray Royer and Bobby Harrison. Ray had joined Procol Harum during its formation [sic] and Bobby at the later recording stage. Both Ray and Bobby were dismissed to make way for Gary Brooker's former companions from The Paramounts, Robin Trower and Barry Wilson. Ray suggested forming a band together with Bobby and called it 'Freedom' after the Charles Mingus tune. This was used to open their live act throughout the duration of the band's existence. [It was also recorded by The Paramounts] Jonathan Weston, Procol Harum's former manager, dismissed at the same time, was enlisted to manage Freedom and auditions took place to complete the line-up. Steve Shirley from Bilston, Staffordshire, was recruited for bass and vocals, declining to join the In Betweens, an early incarnation of Slade. Tony Marsh, ex-Tornado and Screaming Lord Sutch, a proving-ground for the Rock Illuminati (Matthew Fisher being one) completed the line-up on keyboards. Rehearsals began and we were soon commissioned to write the score for the Dino de Lautentis  production Attraction / Black on White. Due to the tight schedule imposed, Tony Marsh was replaced by Mike Lease, already an established session-player having recently recorded with Jimmy Page and John Paul Jones for Beverley Martin's album. We wrote and recorded 14 titles within two months and used Olympic Studios with Eddie Kramer and Glyn Johns engineering. The band, collectively with Jonathan Weston, produced it. Mike picked the string and horn players, wrote out their parts and conducted them: he was 22 years old. We were asked to appear in the film playing the songs as a commentary to a film virtually without dialogue. In its original format it was 100 minutes long but has since been edited to 60 minutes. We were given a flat in Mayfair for the duration of the filming which has appropriately since been converted to a night-club. Directed by Tinto Brass, avant garde and risqué for its time, Attraction / Black on White was critically acclaimed at the following Cannes Film Festival though it was always destined to be an art film. We were invited to play at Dino De Laurentis New Year's Eve party in Monte Carlo for our first gig. Our début single, Where will you be tonight / Trying to get a glimpse of you was released on Mercury Records, produced by Mike. Interestingly Trying to get a glimpse of you is currently enjoying a revival among collectors of psychedelia. The second single Kandy Kay / Escape while you can made too many concessions to commerciality and the band in this format broke up soon after. Mike went back to Wales to become a full-time music student and was replaced by Robin Lumsden, a former member of the Power Pack, as was Bobby. Freedom hit the road, or was it the deck! Until recently we had no idea of the existence of this recording and the fact that it has taken 30 years to surface is a tragedy. We would like to thank all those that made it possible for you to hear this record.  Selina (Copyright 2016: -Steve Shirley ) has just been recorded for demo purposes and below is a very rough Mix in two versions. Steve also auditioned for the "NBetweens" who became Ambrose Slade and then of course Slade.  Jimmy Lea eventually got the gig. 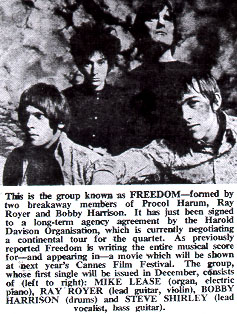 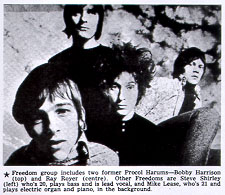